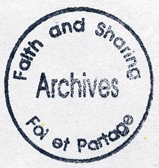 The Faith and Sharing Federation/Foi et Partage is a bilingual Catholic organization with a mandate to deepen and foster the experience of Christian community through week long retreats. The first retreat was held in Marylake, Ontario in 1968 and was led by Jean Vanier, internationally renowned spiritual writer and leader, and founder of other Catholic organizations, including Faith and Light and L’Arche.

The principal function of the Faith and Sharing Federation is to organize annual retreats however they are also active during the year through local communities. Each local community is part of a region which mirrors the boundaries of Catholic dioceses. There are seven regions in North America. Region 7 includes several communities in the United States. The activities of the local communities include regular gatherings for prayer and mutual support and the organization of regional meetings.

A retreat is usually a five or seven day excursion to a retreat centre or church that consists of time for personal prayer, a presentation based on biblical scripture by one or more animators and group meetings where people can share their experiences. Mediation, relaxation and silence are a primary focus of the retreats; music and song are also considered important and there is often a theme song chosen for a retreat. There are “happenings” where participation in dancing, singing or parlour games is encouraged, followed by a sharing of experiences by groups or individuals about the retreat through poems, sketches, imitations, and other forms of expression. A celebration of forgiveness is often followed by a feast known as the “celebration of Life”. The Eucharist is a central activity of the retreats. One of the aims of the retreats is to bring together a cross-section of people with an emphasis on those who are marginalized in society. Each retreat usually consists of priests, bishops, people with disabilities, members of religious orders and laity. The retreats take place throughout Canada and North America. Mini-retreats and week-ends are also organized.

Faith and Sharing in North America is based in Ottawa, Ontario, which administers to local chapters throughout Canada as well as several communities in the United States. The organization currently remains active. Vanier continues to provide leadership at annual retreats.

The Collection is 3.75 metres in extent and has been arranged into 8 series: